On the 10th of December 2021, during the Class of 2020 Graduation Ceremony, François won the Strategy & Sustainability Award for his Strategy Consulting Project. François’ story and his SCP represent very well what an Executive MBA at HEC Lausanne stands for. We had a little chat with  him to learn more about his Award-winning SCP Project.

Dr François Ventura graduated from the HEC Lausanne Executive MBA last year. Tall and sporty, it is most likely that if you stay around him for too long you might be affected by his positive attitude, good spirit and energy. Intensive care physician at the Hirslanden Clinique des Grangettes and consultant anesthetists at the University Hospitals of Geneva HUG, François is a strong mountain lover and in the free time he has, you might find him on some summit or out on a helicopter medical rescue mission with Air Glaciers – yep, Air Glaciers… how cool is that? 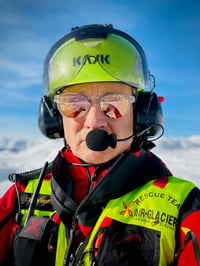 On the 10th of December, during the Class of 2020 Graduation Ceremony, François won the Strategy & Sustainability Award. An award given by the University of Lausanne for the Strategy Consulting Project (SCP) with the strongest positive impact on society and sustainability.

François’ SCP was based on Abionic, a medtech installed at the Biopole Life Science campus in Epalinges and born at the Ecole Polytechnique Fédérale de Lausanne EPFL ten years ago. In January 2020, Abionic has CE certified a Point-Of-Care Testing POCT, the abioSCOPE®. This POCT is based on an innovative nanofluidic technology that has the potential to revolutionize the clinical practice of physicians.

François’ story and his SCP genesis is quiet particular and represents very well what the Executive MBA at HEC Lausanne stands for. We had a little chat with him to learn more about his Award-winning SCP Project.

First of all, François, could you explain what is Abionic and why their technology has the potential of revolutionizing the clinical practice of physicians?

At Abionic they invented this new technology, called nanofluidic that has been patented at the EPFL, already ten years ago. This technology revolutionizes the way physicians and laboratories would – and will - analyze blood, with results available in 5 minutes from a drop of capillary blood and through a machine as big as a small Coffee Machine. In other words, what until now would require a venous puncture, a huge amount of resources, money and laboratories could be done in 5 minutes at the bed side by this small “plug and play” machine. In medical terms, this technology has the potential to help of saving millions of lives and change the clinical practice of physicians. Because it has the potential of analyzing whatever we want in the blood, it basically brings the laboratory to the patient. 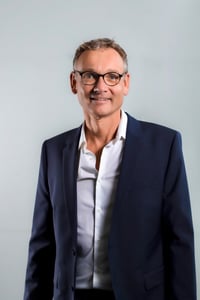 Did you know before your Executive MBA about this technology? How did you get in touch with Abionic?

During the Executive MBA, as part of the Health and Technology Assessment class, we had a symposium and some companies came to introduce themselves and their work while showing us what they were doing in terms of strategy. Abionic CEO, Dr Nicolas Durand, explained how the company was raising money (70 Mio), how they were working and he presented one of the blood parameters abioSCOPE was certified for, the Pancreatic Stone Protein PSP-sepsis-test biomarker. Being an Intensivist Doctor, I knew very well the subject of sepsis and septic shock (a dysregulated reaction of the body to an infection, 2nd leading cause of mortality worldwide) but I have never heard about this new early diagnosis PSP-sepsis-test biomarker and, as a consequence, I got curious. From there, I approached Dr Nicolas Durand, asking for some additional information and he sent me right away about 20 medical studies already published. After an exchange of emails, I was amazed by the potential of this technology and I thought that it was impossible that medical doctor like me did not know about this. So, I proposed him that I make my Strategy Consulting Project on the certified PSP-sepsis-test and the patented abioSCOPE®.

What was the objective of your Strategy Consulting Project?

Well, as already explained, if well deployed this nanofluidic technology has a huge potential: on one hand it could help to save millions of lives and, on the other hand, it also has the potential to save health care systems money and could allow Abionic to lead the competitive global Point-Of-Care Testing market. As an Intensivist Doctor, however, I have never heard about it before… The objective of my SCP then was to understand why I have never heard about PSP-sepsis-test and, in a way, to create a sort of bridge and link between the technological world of a medtech and the medical world. A company such as Abionic is actually full of 60 brilliant people who, unfortunately, are often unaware of the dynamics and the mode of operation of the medical world. Through what I learned during my Executive MBA, through the tools I just learned during my classes at HEC Lausanne, I tried to close this gap between these two worlds by finding and proposing a strategy to implement the PSP-sepsis-test and the abioSCOPE. The final goal is to help save lives, provide significant savings to health care systems, and hopefully bring success to Abionic. With the same objectives, Abionic has developed coronavirus antigenic tests (salivary and nasopharyngeal) with result in one minute and is developing a SARS-CoV2 serological panel with a result in 5 minutes from a drop of capillary blood.

What were the challenges you were faced to during your Strategy Consulting Project?

In a way, as a physician, I am the ultimate user of the product. As a consequence, one of the biggest challenges was to learn how to make this team of engineers at Abionic communicate with people like me, with physicians: the ultimate user of the product. And I could do that by using the tools I learned during my Executive MBA. And the good news is that since last summer we have been using PSP-sepsis-test in our daily practice as intensivists in Geneva, and also for Covid patients.

Did your project remain a theoretical one ? Or did Abionic use it in practice ?

Oh, yes. The project has been applied and is continuing to be applied as we speak. We continue the project and almost everything that I wrote is used daily by the team at Abionic. I am also still collaborating with Abionic as a consultant for all the medical and scientifical communication, presentation at congresses, conferences and literature review. I am very connected with them and it is good to know that my SCP project did really lead to something and it is still used at Abionic.

In addition to two new important medical studies published in 2021 confirming the use and effectiveness of the PSP-sepsis-test, this prize awarded by the University of Lausanne is for me the recognition of the social, economic and sustainable impact of this technology.

François Ventura’s SCP is the perfect example of what an Executive MBA at HEC Lausanne is all about: finding new inspirations, new solutions and always going beyond.

François’ passion for his work brought him to embrace new opportunities with his Strategy Consulting Project and since the beginning of 2022 he is now working also as Chief Medical Officer at Abionic, always while keeping his work as Intensivist and anesthetist in Geneva and rescuer at Air Glaciers in Valais.

To discover more about the Executive MBA at HEC Lausanne you can download a brochure, get in touch with us or attend one of our  Information Webinars.

It’s International Women's Day. Where are we on gender equality?